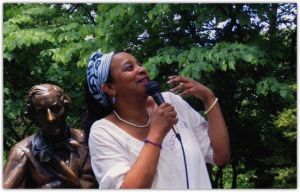 Therese Folkes Plair, an award-winning performing artist, is a classically trained singer who in 1979 changed her artistic direction from opera to world music and storytelling. Her research, performances and teaching have since focused on the music and the oral and written literature of people of African descent. She has a BA in theater/anthropology from Sarah Lawrence College, Bronxville, New York. She studied Eastern and Western movement and sound (1980-1994) with the late Katya Delakova, and jazz harmony (1980-1985) at Billy Taylor’s Jazz Mobile in New York. Her master drum teacher (1980-1985) was Pablo Landrum.

—Since 1990, Ms. Plair has regularly spent several months a year in West Africa researching oral traditions, language and women’s rituals. Her ethnographic work in Ghana’s Asante region formed the basis for a one-woman performance work (“If It Doesn’t Crack, It Won’t Break”), for which she won the Josephine Mercy Heathcote Award in 1994. She was selected for a Fulbright Research Award in 1996 (alternate)