Donate To Support Our Free Programs 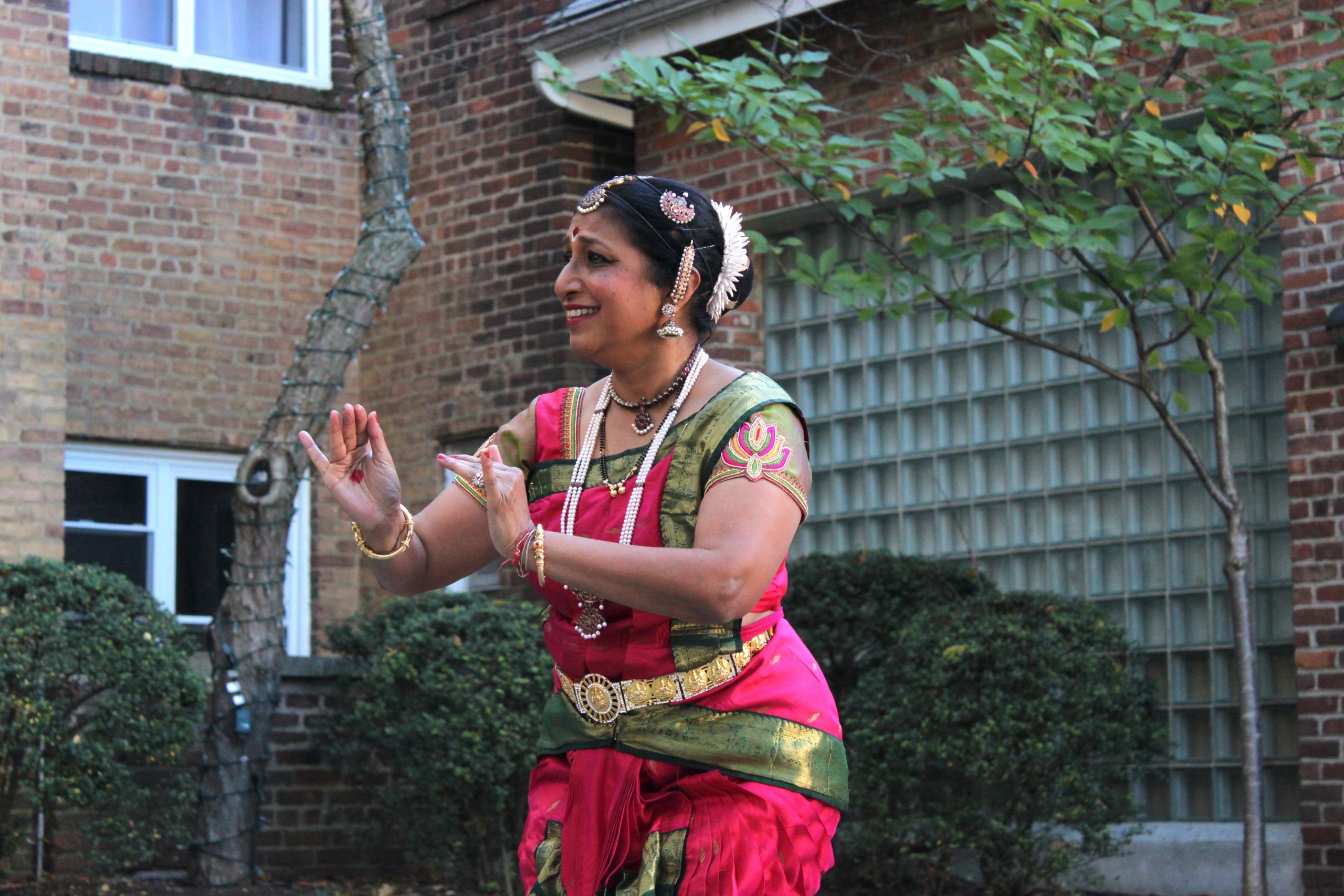 On Sunday, October 23rd, Pelham Art Center celebrated Diwali, the Festival of Lights, with a wonderful program full of the arts. The Art Center brought Diwali traditions and Indian culture to the community with a mesmerizing Indian classical music performance by Satyaki Dutta (sarod player) and Vikas Yendluri (tabla player), as well as an Indian classical dance (Kathak) performance by Sanika Phanse and another Indian classical dance (Bharata Natyam) performance by Dr. Nalini Rau and her students. Kids had a fun time painting their own “diyas,” or clay lamps, to be lit up, while people also enjoyed taking photos with traditional Indian “chunnis,” or scarves, against a festive backdrop. All in all, it was a rich cultural celebration signifying light over darkness, good over evil, knowledge over ignorance, and health, wealth and peace for all.

See photos of the event at the bottom of the page!

Diwali serves to bring family and community together with its promise of hope and joy. Come experience the delight of Diwali at Pelham Art Center. This free event will take place inside the Pelham Art Center 12:00 to 2:00pm.

Diwali is a major festival for Hindus, Sikhs, Buddhists, and Jains, who believe that light is a metaphor for knowledge and signifies health, wealth and peace. All ages are welcome to take part in the folk art festivities, which will include a classical music performance (sarod and tabla), classical dance performances (Kathak and Bharata Natyam) with an interactive component, and a hands-on art project where you can paint your own diya (mini clay pot) representing sakshi, the divine inner light. While supplies last.

Satyaki Dutta represents the Sarod Gharanas of Shahjahanpur. He had the privilege to learn from the legendary Sarod maestro of Senia Shahjahanpur Gharana Padmabhushan Pandit Buddhadev DasGupta. Subsequently, he continued his musical pursuit under Sitar virtuoso Pandit Sugato Nag and Ustad Irfan Muhammad Khan, the doyen of Lucknow Shahjahanpur Gharana. He is a recipient of the ArtsAlive 2021 Artists’ Grant awarded by ArtsWestchester. Satyaki holds a PhD degree in Mathematics and resides in Westchester County in New York. Vikas Yendluri is a musician & tabla player based in New York. He began his training at the age of 5 under Sri Arshad Syed, and has continued training under Ustad Zakir Hussain. In addition to his work as a soloist, Vikas has accompanied some of the greatest masters of Indian classical music, including Ustad Amjad Ali Khan, Ustad Shahid Parvez, and Pandit Rajeev Taranath. He has also taught Indian classical music at various institutions, including at Stanford University (his alma mater).

Raga is literally something that “colors,” or tinges, the mind with some definite feeling, a wave of passion, or emotion. It is a collection of pitches, similar to a scale or mode in Western music. Each raga is defined, however, not only by the pitches themselves, but also by specific formulas for using them.

Sarod is a fretless melodic instrument that belongs to the lute family, known for a deep, weighty, introspective sound, with sympathetic strings that give it a resonant, reverberant quality.

Tabla is a pair of twin hand drums and has been the principal percussion instrument in North Indian classical music since the 18th century.

About the Kathak Dancer

Sanika Phanse is a Kathak dancer, trained in the classical arts since the age of 4. She is a practitioner of Lucknow Gharana style of Kathak, which places great emphasis on the intricacy of movements and grace in the art form. She is currently a student of Smt. Renu Sharma, a prime disciple of the late Pt. Birju Maharaj and previously studied under Smt. Shiva Mathur. Sanika was recently mentioned in the Times of India for her literary contributions on the impact of social media on the classical arts. Passionate about the artform and sharing it with the community, Sanika hopes to share the joys of storytelling through Kathak with her performance at the Pelham Art Center’s Diwali Festival.

Outside of dancing, Sanika is a Software Engineer and recent alum of the University of Texas at Austin, where she earned her B.S.E in Electrical and Computer Engineering.

About the Bharata Natyam Dancer

Dr. Nalini Rau will present dances on Ganesha with her students; on Devi with one senior student; and on Ramayana as a solo. Stay till the end of the performances for a brief interactive workshop!

Dr. Nalini Rau is a dancer, choreographer, educator and teacher of Bharata Natyam, based in New York.  She trained with the legendary nattuvunar/percussionist Guru Dakshinamoorthy Pillai and the duo Krishna Rao and Chandrabhaga Devi. Her dance is informed both by her training, her academic background as well as her passion for teaching and connecting dance to contemporary issues. She has a BA degree in Economics and MA in Linguistics from Delhi University and a Masters and a doctorate from the University of Illinois. She likes the challenge of turning abstract ideas into visual movement and is truly happy when her audience and she connect via dance.

The 37th Senate district honored Nalini Rau for ‘exemplary services’ and the Senate of the State of New York honored Nalini Rau for ‘significant contributions and accomplishments’ on July 31st, 2022. Arts Westchester awarded her in April 2015, the “50 for 50” award as a recognition for her “outstanding contributions as a choreographer.” She was the honoree artist for IACAW in 2018 her contributions to the community. Her Guru awarded her the Natya Navaratna which she received from the President of India under the auspices of Natya Kalalayam.

This event is made possible, in part, by ArtsWestchester with funds from Westchester County Government with the support of County Executive George Latimer. Pelham Art Center also receives funding from: New York State Council on the Arts, A State Agency, TD Charitable Foundation, The New York State Office of Children and Family Services (OCFS), and Pelham Community Members and Annual Fund Donors.