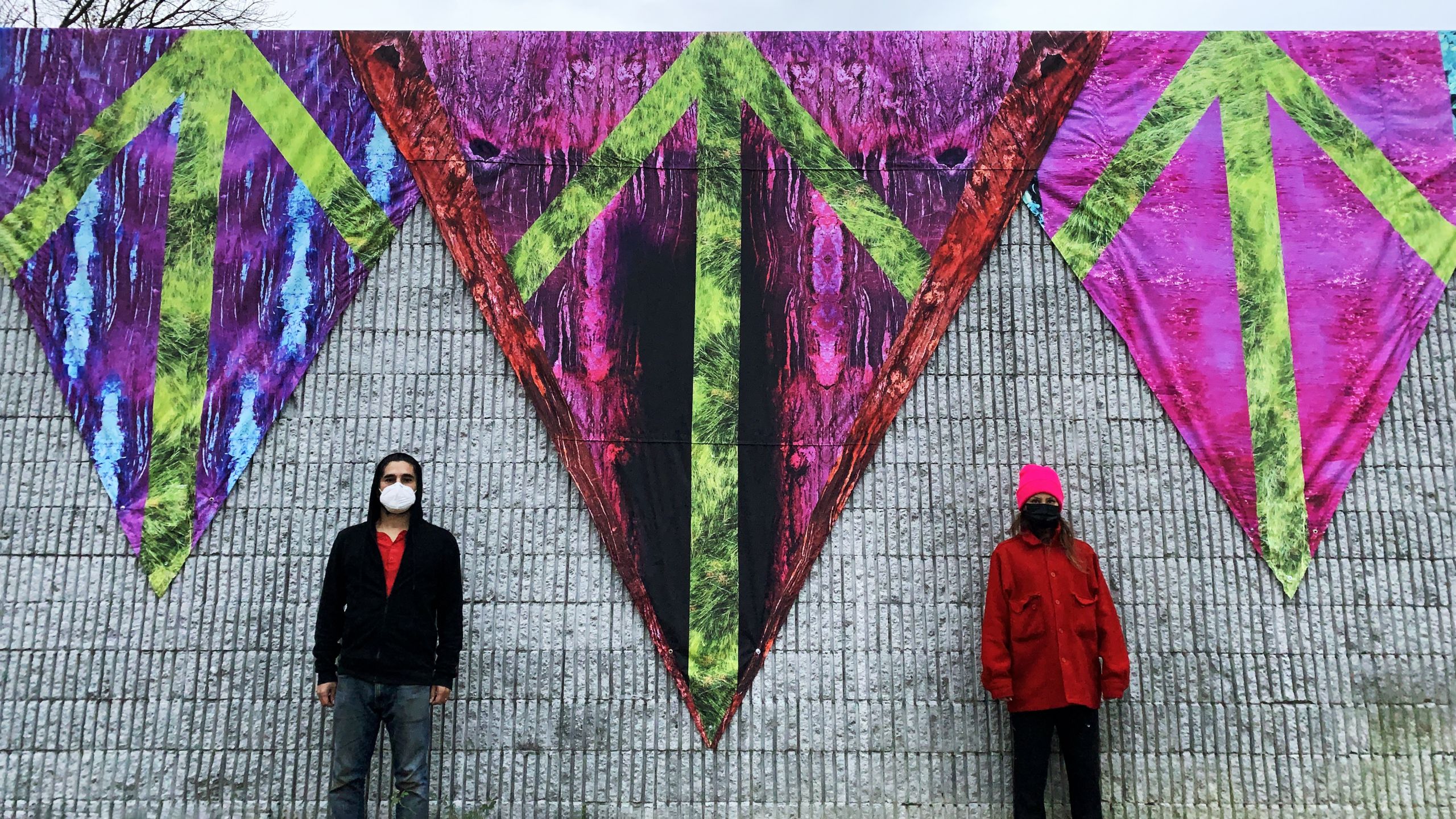 Join Pelham Art Center with Sara Jimenez and Jason Schwartz on Zoom to discuss their public art installation and learn more about the project. This Opening/Artist Talk is FREE and open to all! Click the link below to join.

In Revivival, Sara Jimenez and Jason Schwartz present three fabric triangular banners that drape over an exterior wall of Pelham Art Center. The banners are composed of manipulated photos taken of the nearby coastline of Pelham Bay. The layout and geometry of each triangle refer to the pitched gables of Tudor Revival architecture that pervade the Village of Pelham and surrounding suburbs. The inverted gables of the piece point downward, toward the earth.

In their explorations of the architecture and landscape of the region around Pelham, the duo has been drawn to locations where the material of human habitation interacts with natural processes, e.g. where remnants of old bricks, smooth sea glass, and ceramic fragments mix with shells and rocks on the coastline of Pelham Bay. This blurring of boundaries via the shared presence of remnants of natural phenomena and human histories is a core inspiration for the piece.

The duo has also been drawn to the stucco and stone facades, half-timbered framing, and pitched gables of Tudor Revival architecture. The style gestures to a quaint, imagined history of aristocratic country life, far from the industrialized bustle of modern America. It is a fiction imposed on the landscape, meant to entice homebuyers at early surges of the American suburbs.

Instead of the austere colors and plain faces of Tudor Revival gables, which are themselves purely decorative, the surfaces of these triangles are made up of abstracted images pulled from natural features of the landscape of Pelham Bay: rock faces, beach mud, meadows, and the bay itself. Jimenez and Schwartz are interested in interrogating and troubling constructed histories and reorienting the eye toward the land and the complex histories it holds.

Small collaborative works by Sara Jimenez and Jason Schwartz are currently for sale in the Pelham Art Center Art Boutique, which offers affordable art and artisan items through December 23rd.