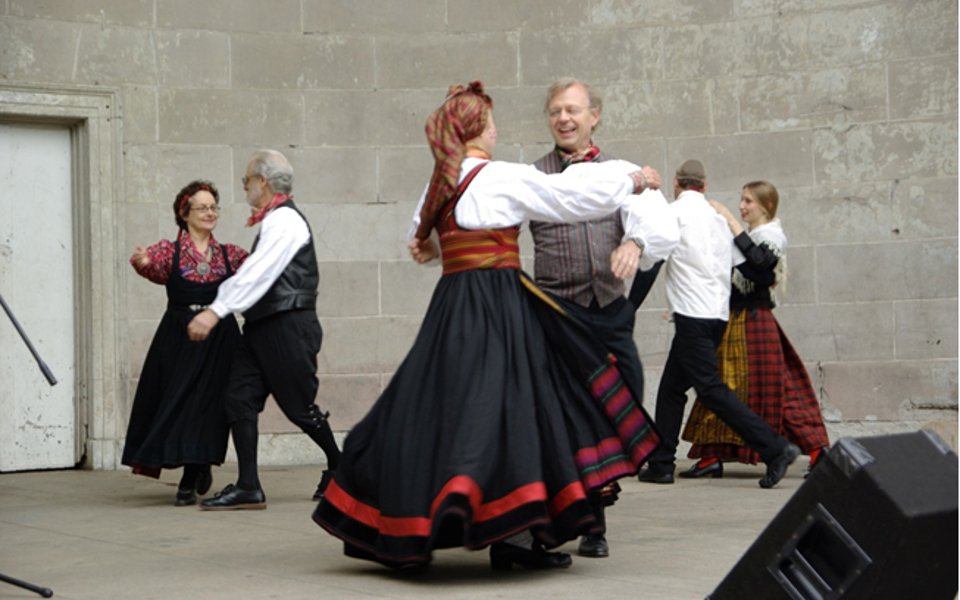 What better way to celebrate the longest day of the year than with a real Scandinavian midsummer event! Dancers wearing traditional Scandinavian clothing will demonstrate and teach accessible and fun Norwegian and Swedish folk dances. A fiddler will play and you will learn how to make lovely floral head wreaths.

Scandinavian folk dances are generally done in couples, with the exception of a few virtuoso solo dances.  They include turning dances as well as set dances for groups of couples.  The dance relies heavily on the turning forms, some of which are based on Continental European turning dances.  The performers Cathie Springer and Doug Shearer have been dancing these traditional dances since the 1980’s and have taken part in several competitions both in Scandinavia and the U.S. Cathie is the chair of annual workshops of the Hardanger Fiddle Association of America and is editor of their quarterly journal; Sound Post.  Paul Friedman will perform on the fiddle.

The bunad is a traditional Norwegian costume worn by both men and women. Traditionally bunads represented the family home and the area people came from. Today the bunad is still worn for celebrations and special occasions like weddings, baptisms and confirmations. Balls and Norwegian Constitution Day (May 17) are also typically bunad wearing days.

Midsummer – Given Scandinavia’s long, dark winters, it’s not surprising that the arrival of summer is a big deal throughout the Nordic countries. In Sweden, Midsummer’s Eve is one of the most important days of the year, rivaling Christmas with its festive spirit and traditions. The Scandinavian countries mark the height of summer with big celebrations and by soaking up the sun in the countryside, preferably alongside a lake or the sea. There they make wreaths from wild flowers to adorn their hair, dance around the maypole or a bonfire singing traditional songs, barbecue and party into the night with friends, old and new.

Midsummer was considered to be a time of magic, and anything to do with nature was thought to have a special power. Gathering flowers to weave into wreaths and crowns was a way to harness nature’s magic to ensure good health throughout the year.  Even though most people these days probably are unaware of the magical origins of the tradition, weaving crowns of flowers is still a major part of any Midsummer observance. Occupational therapist, teacher and inventor of creative solutions, Karen Lund Brandt will teach making these beautiful flower head wreaths to wear. Karen is both a Norwegian-and Swedish-American. She is proud to share her heritage and eager to share this tradition with you.