Pelham Art Center invites you to a free public celebration of Ukrainian culture with music and dancing in the courtyard. 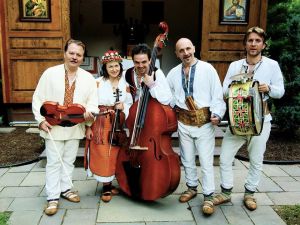 Folk melodies and dances of the Carpathian region are brought to life by the virtuoso playing of Cheres. The musical arsenal of cimbalom, violins, bass, flutes, accordion, panpipe, double pipe and a variety of percussion are complemented by the traditional, hand-embroidered garments worn by people in Western Ukraine.

Hailed to be “the best purveyor of authentic Ukrainian folk music in the United States” by the former head of the Archive of Folk Culture at the Library of Congress, Cheres brings to life melodies from the Carpathian mountains in Western Ukraine and neighboring Eastern European countries. Since its founding in 1990 by students of the Kyiv State Conservatory in Ukraine, the ensemble has enthralled North American audiences with their rousing renditions of folk music performed on the cymbalum, violin, woodwinds, accordion, bass, and percussion. Virtuoso musicians join spirited dancers, all donned in traditional Western Ukrainian hand-embroidered garments, to paint a vivid picture of Ukrainian folk art. The musicians, most of whom are from Halychyna in western Ukraine, are united by an artistic vision to preserve their traditions. “Cheres” is actually a little known Ukrainian term for a metalstudded leather belt formerly used as a bulletproof vest during the Middle Ages. Today, the group Cheres has adopted this Medieval protective shield as their name to symbolize the safeguarding of vanishing folk art traditions from the Carpathian mountains. 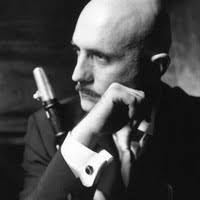 Since his arrival in the United States in 1991, Milavsky has appeared with the Kyiv Symphony Orchestra, the Amato and Riverside Operas, worked on experimental projects, produced Off Broadway shows, and taught music privately and institutionally. Currently, he performs regularly as a B-flat, A, E-flat, and bass clarinetist with opera and symphony orchestras, woodwind and string quintets and other ensembles.

Cheres is sponsored by: 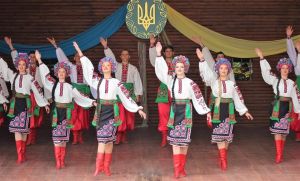 Performers from the VESNA Dance Group of the Yunist Dance school will perform the following dances:

The Yunist dance school was formed in 1996 by Hryhoriy Momot to give children of Ukrainian heritage the opportunity to learn traditional Ukrainian dance under professional instruction. The dance school is comprised of seven ensembles that each have three age levels. The youngest group includes children from 5-7 years of age, the middle group 8-12 years of age, and the oldest group 13-18 years of age. The dance school also has a professional group, “Yunist.” The best dancers are chosen into the ensemble starting at the age of 16. The aim of the school is to honor the rich history and culture of Ukraine and help preserve Ukrainian heritage. The ensembles regularly perform at cultural festivals, art centers, colleges, and travel outside the country. 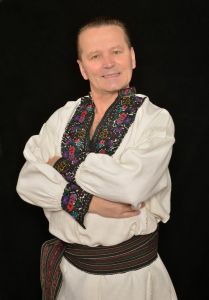 Hryhroriy Momot was born near Ternopil, Ukraine and began dancing as a young child. He attended a cultural primary and secondary school specializing in Ukrainian dance. From there he continued his formal training at the College of Cultural Studies in Polissya and then at Kyiv Cultural Institute, the premier university for the study of traditional Ukrainian art forms. Mr. Momot studied choreography, folk dance, Ukrainian costume, and other related areas thereby receiving his degree and certification as a Director of Ukrainian Folk Dance Schools. After graduating Mr. Momot joined the faculty of the Chortkivskyj Pedagogical College where he taught Ukrainian folk dance, choreography, and the history of Ukrainian costume. In Chortkiv he also founded, choreographed, and directed ”Dzereltse,” a children’s Ukrainian folk ensemble. Mr. Momot also directed Prolisok Ukrainian Folk Dance Ensemble in Pidvolochyska. Mr. Momot has been teaching Ukrainian dance in the United States since 1996. 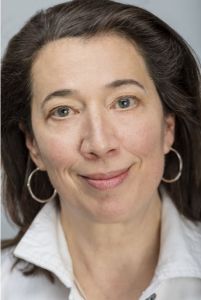 Nadia Garber is a Ukrainian-American who is passionate about Ukrainian art, music, language and folklore.  Her grandparents and parents fled the Soviet Union during WWII to settle in America, where they instilled in her a strong sense of Ukrainian identity.  They passed along many multi-generational traditions, one of which was the art of making Pysanky – a batik method of egg decoration performed during the Easter season.  Nadia religiously makes Pysanky every year, as is the custom of her mother, grandmother and great grandmother.  She loves to share her knowledge with family and friends and is excited to demonstrate this beautiful folk art at the Pelham Art Center. 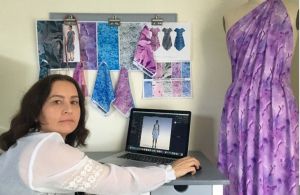 Beginning her studies at the Kyiv Technological Institute of Light Industry, Tania Homenko continued her education in New York City’s Fashion Institute of Technology (FIT). This opportunity was made possible with the support of her Ukrainian-American friends and led to a successful career in the fashion industry. Today, she is an adjunct professor at FIT, a designer in the Garment Center, and the owner of a recently established clothing brand – Sew Fashion School. This fall, a collection inspired by traditional Ukrainian costume will be released. Long time Pelham resident, Tania is excited to have an opportunity to share her love and knowledge of Vyshyvanky – the traditional Ukrainian embroidered shirts. @sewfashionschool 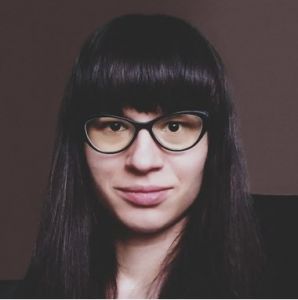 Olga Khomenko is a graphic designer from Cherkassy, Ukraine. She has studied Graphic Design, Fine Arts and Art History and is skilled in Ukrainian Applied Arts. Although she had been in the USA numerous times, her March 9, 2022 arrival at JFK was not a planned visit. As the war in Ukraine has started, she packed her one bag of essentials and made a weeklong trip through Western Ukraine and Europe to get to the United States to stay with her aunts and their families. She is grateful for all the support that Ukraine and its people have received from all over the world, and is happy to share her expertise in Vytynanky – the traditional Ukrainian art form of papercutting.

Stop by during “Spring into Pelham” event on April 10th,
hosted by Pelham Chamber of Commerce

We will be collecting donations for relief in Ukraine during this event. Cash donations will go to Razom to support the immediate needs and relief efforts in Ukraine.  Razom was created to provide urgent help and support for the people of Ukraine, by giving critical humanitarian war relief and recovery depending on the most urgent needs as they evolve. Learn more at razomforukraine.org.

This event is presented with support from: