In observance of the 20th anniversary of September 11th, Pelham Art Center presents the installation GESTURE by Manju Shandler in its gallery from August 28 through September 18, 2021.

Manju Shandler’s nearly 3000-piece painting installation, GESTURE, is a memorial to those lost on September 11th, 2001. Reflecting the size of this tragedy with one painting for each person lost, it is a personal study of the tremendous ramifications of this day in our collective history. Gesture is a meditation on the many facets of life, death, the past, and the future that have been inextricably altered by that single day. Completed over a three-year period, the style and content of each piece spans the range of human emotion from horrific to uplifting, from dark to light.

Overwhelmed with emotion like so many New Yorkers in the wake of the September 11th terrorist attacks, Manju Shandler sought to ground herself through the process of making art. She chose to express the magnitude of loss through individual paintings, one for each victim. Shandler turned to the images that dominated the news media after 9/11 and juxtaposed them with images of her own creation. Among the approximately 3,000 paintings she created are portraits drawn from photographs appearing in the New York Times’ Portraits of Grief series. Each painting measures 4 by 9 inches.

850 GESTURE paintings were previously displayed in 2017 at The National September 11th Memorial & Museum, NYC for the 15th anniversary exhibition Rendering the Unthinkable: Artists Respond to 9/11. In 2007 all 2,973 GESTURE paintings were exhibited at The Honfleur Gallery in Washington DC. Pelham Art Center will exhibit the GESTURE installation beginning Saturday, August 28 through Saturday, September 18th. The Pelham Art Center gallery is free and open to the public. Gallery Hours: Monday-Friday 10AM-5PM, Saturday 10AM-4PM.

Pelham Art Center will host a public meditation on Saturday, September 11th 12:00-2:00pm. Inside the gallery, visitors are invited to participate in a silent group meditation memorializing 9/11 and all those whose lives are lost and affected. Outside in the courtyard, guests may share reflections and experiences. This event is free and open to all who wish to remember, reflect, and invoke peace through meditation. 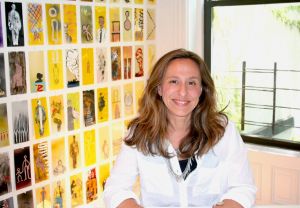 Manju Shandler is a visual artist and theatre designer.

Manju Shandler has had solo shows at Brown University’s Sarah Doyle Gallery for Feminist Art, The  Hammond Museum, The Honfleur Gallery, The Governor’s Island Art Fair, The Bergdorf Goodman Store  Windows and group shows at The Untitled Space, Denise Bibro Fine Art Gallery Ho, The ISE Cultural  Foundation and throughout the US, Amsterdam, Berlin, Tel Aviv and Hong Kong. She regularly shows in her  community of Brooklyn, NY.

Manju Shandler was selected as a NYFA Artist/Entrepreneur and received the University of Rhode Island’s  Sea Grant for Visual Artists, The Art Asset Award from The ISE Cultural Foundation, and was selected for The  Art Sprinter Award.

From 2016-2018 The National September 11th Memorial & Museum exhibited 850 paintings from Manju  Shandler’s 3,000 piece painting installation, GESTURE, in Rendering The Unthinkable: Artists Respond to  9/11 an exhibition honoring the 15th anniversary of this tragedy.

Manju Shandler’s Puppet/Costume Design has been featured at Lincoln Center’s Avery Fisher Hall, PS 122,  The LABA Theatre and at Radio City Music Hall. She has received an Emmy Nomination, Innovative Theatre  Award, a Jim Henson Foundation Grant and was an Emerging Artist at the Eugene O’Neill Puppetry  Conference. She is one of the original sculptors of masks and puppetry for The Lion King on Broadway.

She has a B.A. in Performing Visual Art from Bennington College (1995).