Romare Bearden was a prolific American artist who sought to depict both the experiences and cultural nuances of the African-American community through his artwork. He was born in North Carolina to parents who were involved with the production of the art and literature during the Harlem Renaissance, an era and an upbringing which would have a great influence on not only his artwork but his entire life. He grew up and was based in and around the New York area and spent some time in Europe and the Caribbean. Bearden was known for his abstract and Cubist style collages in conjunction with his humanist work wherein he supported young up & coming artists, which has continued even after his death. 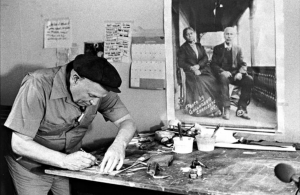 My purpose is to paint the life of my people as I know it. 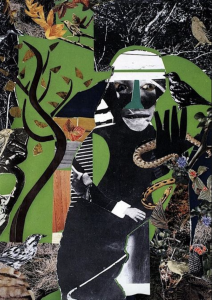 Bearden’s 1964 work titled, “Conjur Woman” was inspired by the folklore surrounding the mythical conjure women that were present in African-American folktales. The conjure woman was synonymous with the depictions of voodoo queens and other illusive spiritual figures that emerged out of slavery in the Black community. Bearden’s collage captures this female figure, simultaneously feared and admired, as she scourges the forest floor for plants and herbs that aid her in her magical conquests. Bearden sheds light on the stories and lore lost during the Great Migration wherein Black Americans left the life that they had known behind for one that was not only uncertain but also one that rejected their identity. The style of the piece, that being collage, also aids in the understanding of the piece as it reflects both the fractured diaspora as well as the the fusion of different identities that African Americans embodied in the post-slavery era.

When I conjure these memories, they are of the present to me, because after all, the artist is a kind of enchanter in time.

Exemplified through the iconic work of Romare Bearden, collage as a medium lends itself to exploring combinations and juxtapositions of ideas & images through art. Pelham Art Center will host a summer workshop inspired by “Conjur Woman,” where we will discuss the artwork and complete collages influenced by Bearden’s work.